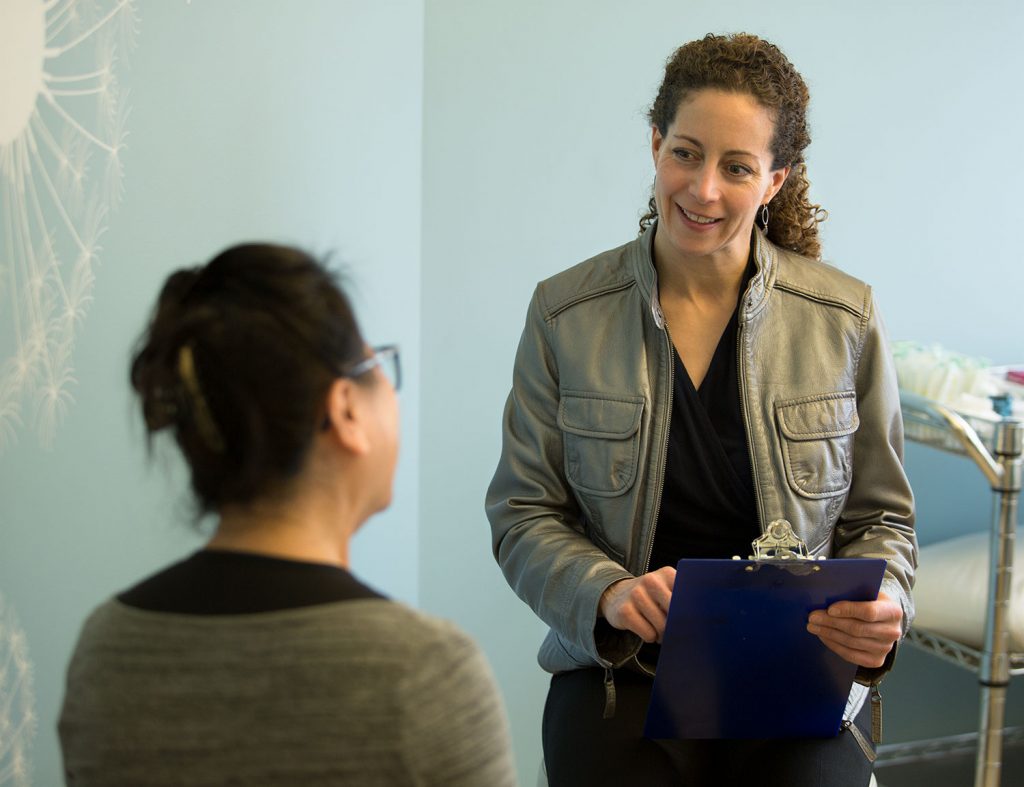 Radiology has come a long way just in the last few years, and Alaska’s women have access to state-of-the-art radiology right here at home. In addition, some new technologies can be used to more effectively diagnose a wide range of health issues specific to women.

One of the state’s leading experts in women’s health, Dr. Kelly Powers, joined Alaska Imaging in 2018, the radiology team serving patients at Alaska Regional, Mat-Su Regional, and several other providers around the state. A fellowship-trained radiologist, she specializes in diagnosing breast cancer and helped pioneer new technologies in Alaska.

“What we know from nearly three decades of research on mammography,” Dr. Powers tells us, “is an annual exam reduces your chance of dying from breast cancer by upwards of 30 to 40 percent. It’s the only thing we know of that can have that large an impact.”

An American woman has a 12.4 percent chance (or about 1-in-8) of being diagnosed with breast cancer in her lifetime. Yet, only an estimated 67 percent of women over age 40 report getting a mammogram in the last two years. Why does it matter?

Because breast cancer is, itself, not deadly. It’s when breast cancer spreads to other organs or other parts of the body, that it becomes a killer. That’s why it’s so important to identify breast cancer early – when it has not metastasized beyond the breast area and is still treatable.

“I think of mammography like a seat belt, “Dr. Powers says. “I wish we all took mammography for granted the same way we do a seat belt: When we get in the car, we put our seat belt on. It’s just what we do, and no one questions it. Most people wear a seat belt their whole life and never get into a crash. But for others, that seat belt prevents injury or even death.”

She goes on to tell us that, in the field of radiology, doctors are constantly looking for better ways to catch cancer earlier. One of those ways is 3D mammography, a revolutionary technology that Dr. Powers helped introduce to communities in Alaska. Whereas traditional mammography captures two images of the breast, side-to-side and top-to-bottom, 3D mammography captures multiple images at different angles for a clearer, more complete picture of the breast.

“Instead of giving us just two images, we have dozens or even a hundred images, so we can see through the density of breast tissue to help us identify more cancers,” Dr. Powers says.

Dr. Powers is a fellowship-trained specialist, which means she received additional education after medical school in radiology specific to women’s bodies, and she is keenly aware of new developments in imaging technology, so she can ensure that her patients get the best option.

The effective applications of radiology go far beyond breast exams. Dr. Powers uses 3D imaging to diagnose all diseases of the breast – including cysts, discharge and breast pain. “There are lots of different masses that can appear in the breast that are not cancer,” she says.

In addition, Dr. Powers performs imaging for a wide range of women’s health issues, including pregnancy and fetal MRI and prenatal ultrasound.

Another new technology that did not exist in Alaska before Dr. Powers introduced it is MRI defecography, which is a more effective way to look at internal organs and tissues to diagnose pelvic-floor abnormalities, such as those associated with fecal incontinence or constipation.

“This is kind of an unspoken problem,” she tells us, “because it’s embarrassing,” and many women feel uncomfortable talking about it. Many health care providers may not ask about it on a routine basis it and it affects many women of a certain age or after child birth. Before, doctors had sort of an antique way of looking at it that involved inserting a radio-dense paste suppository, then taking an X-ray video while the patient used the toilet.”

Worse even than the old procedure was that the X-ray video produced fairly unclear imaging, and doctors were forced to analyze shadows. Sometimes, the imaging was so inconclusive that doctors resorted to surgery as a method of diagnosis.

“But MRI defecography completely revolutionized that,” Dr. Powers says. “We can see the soft tissues. I can see the pelvic floor, I can see the ligaments, the muscles and all the organs. And I can tell what part of the patient’s system isn’t working right – or identify that it is all working right and the problem is something else that can be treated with physical therapy.”

MRI defecography is an invaluable tool for colorectal surgeons because Dr. Powers can show them what, exactly, the problem is before they go into surgery. And equally important, she can prevent patients from getting unnecessary surgery.

But clearly, for most women, the advent of 3D mammography stands out as the most impactful advance in decades not only because it could affect virtually all women, but also because it may turn out to be a game-changer in detection – which means it will save more lives.

When should you get a mammogram?

If you can feel a lump in your breast that turns out to be cancer, it is often stage 2 or higher. So early detection is critical to beginning treatment before the cancer grows or spreads.

Conversely but equally important, mammography can determine if a lump you feel is not cancer.

This is why regular mammograms are so important. The key to effective treatment is early and accurate diagnosis.